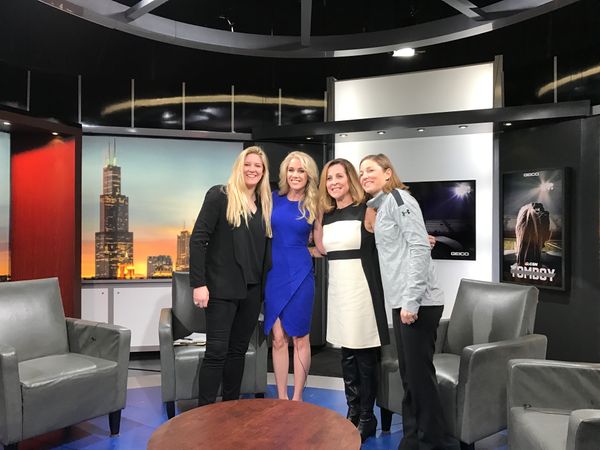 (L to R: Sami Grisafe, Kelly Crull, Peggy Kusinski, and Kelly Amonte Hiller) Click Image above to find out more about TOMBOY. Thank you to CSN Chicago for inviting me to be a part of this very important conversation!)

I recently participated on a CSN Chicago panel to support the launch of the documentary, “Tomboy, Elevating the Conversation about Gender in Sports and Beyond.” I’m often asked to speak to groups and the media about women in sports. This is due to my background growing up in a primarily male dominated California sports scene and for being a quarterback with Team USA and the Chicago Force. I was grateful to serve on the panel and enjoyed hearing the perspectives of the other panelists. It was a provocative experience as it kept me up most of the night with lingering questions.

Why do we refer to “women’s sports” instead of “women in sports?” Specifically, in my sport, why is it “women’s football” instead of “women who play football” or just simply, “football players?”  Why do we feel compelled to constantly make the case that women’s sports are just as important as men’s?  I believe that language matters and affects how we perceive and promote ourselves as athletes.

Being a part of a female team eluded me for most of my childhood. I only played on male teams for the first decade of my athletic life. I don’t believe this makes me better than an athlete who grew up playing solely on female teams, but I do think it has given me a perspective that might help provide some insight in the disparity between male and female sports. 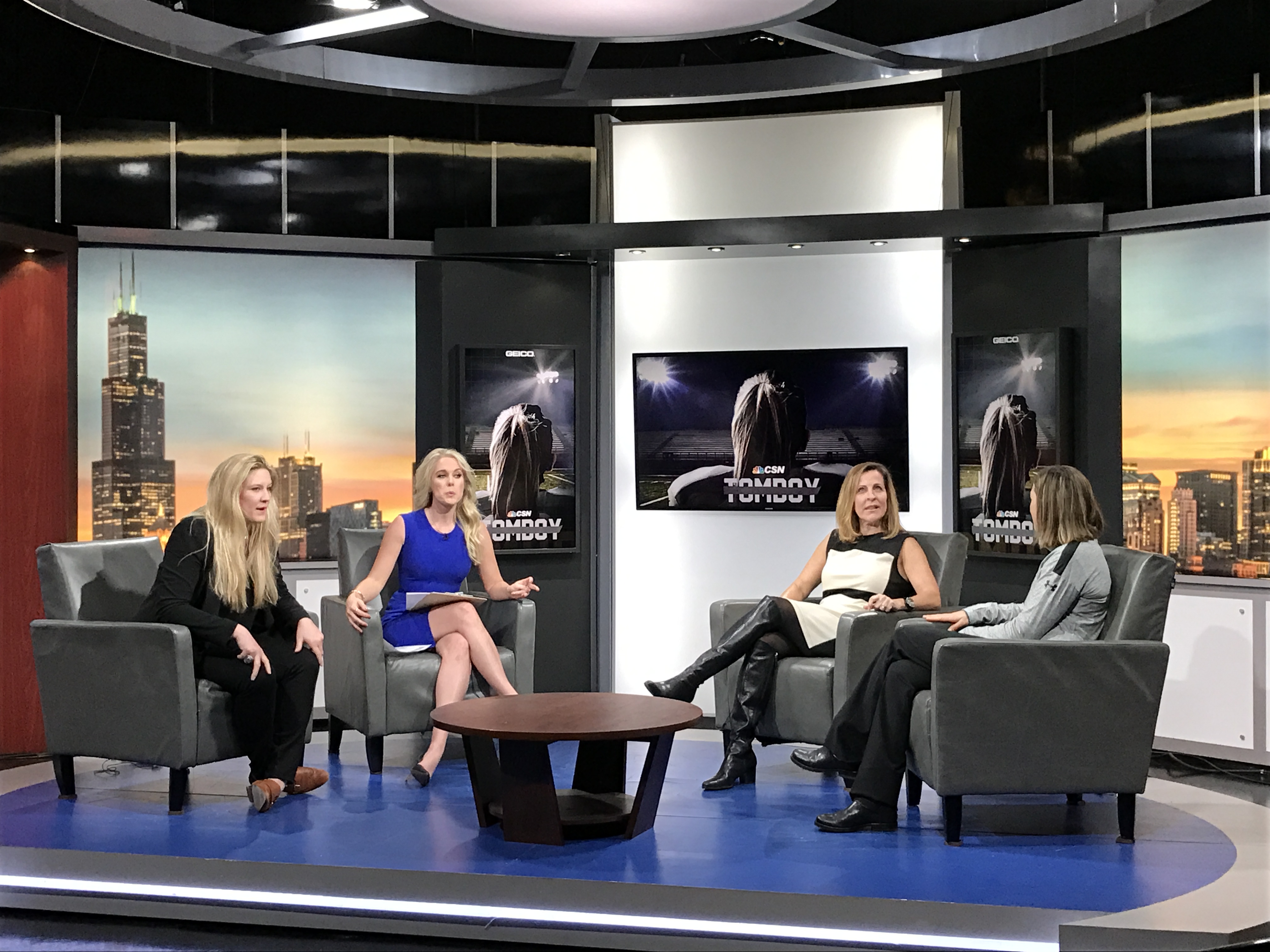 When I took the first steps to realizing my first dream: to be a member of the Redlands High School football program, I faced adversity. I knew I would face adversity. I didn’t care. I loved football so much that I was willing to take on the chin anything that anyone wanted to throw at me. My motivation was pure, I had no ulterior motive. I had to prove my integrity every day at practice and guess what, so did everyone else in the program. Yes, every male player had to prove that he wasn’t just there to show off his jersey to a girl he liked at school, or garner the “points” it might get him for his college applications.

During one of our pre-season workouts for the RHS football team, the coach came up to me just before we were about to endure a painful amount of push-ups and said, “You can do girl push-ups*, Sam”. I replied, “Those aren’t football push-ups, Coach”, and continued doing the same push-ups as my brothers. The coach was trying to be helpful to me, but I knew that if I took this shortcut, I would never be looked at as an equal. Not by the coaches, nor my teammates. The shortcut would become a booby trap and my existence on the football team would require an asterisk (*modified workouts according to gender).

Respect was awarded to no one by asking for it. Was my road to respect more difficult than my male teammates? Sure, it was, but complaining about growing pains doesn’t expedite the process. Nobody ever whined their way to a championship.

People think being the first woman to play QB in a Varsity Division I football game is a great accomplishment. In reality, I just got lucky to have that title, because of timing and the work of so many people before me who fought for Title IX. The real accomplishment was earning my place as a player on the team. Earning the respect of my teammates and coaches. It was an accomplishment for anyone to make the team at my very traditional school, male or female. The Long Blue Line is a proud group of student-athletes and I earned my place beside them. No asterisk, no pink jersey.

Immediately following my first football season at RHS I was asked to try out for the Women’s Water Polo team. Women’s Water Polo at my high school in California was elite. The year I played on the JV squad, the Varsity Women’s team won the CIF Division I Championship. I had no experience with the game and, frankly, I was awful. Let’s just say, I stuck to land sports from there on out, but I showed up to every practice and gave my best effort.

It was early in the Water Polo season when I experienced a major difference from what I had experienced playing on predominantly male teams. We arrived at the pool before dawn for a hell week workout, steam billowing atop the water. I thought to myself there is nothing worse than the workout we are about to endure, I was wrong. Before we could change into our swimsuits, the coach called us into the weight room adjacent to the pool. We were to have a heart-to-heart addressing some hurt feelings of a few players on the team. I was completely oblivious. One teary-eyed player voiced how distraught she was that one of our teammates wasn’t more cordial to her during the passing periods at school. You guys, I was out of my damn element! 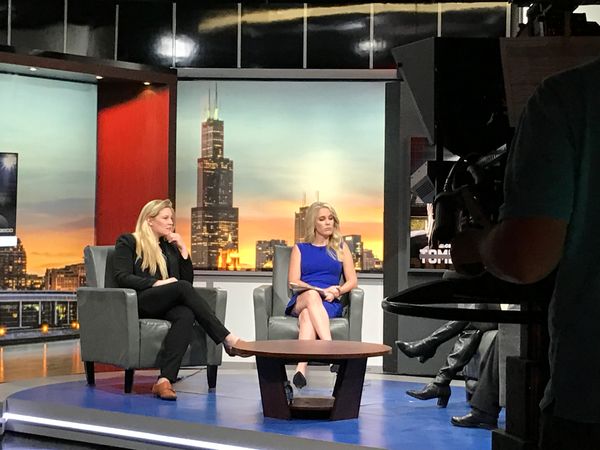 I sat in that weight room and listened to sob-drowned conversations wishing I was doing laps before dawn in that steaming pool. I had no experience with this on any team in my life up to that point. When I put my insensitive two cents in, I was disregarded as the benchwarmer who didn’t get it, which wasn’t entirely untrue.

Eventually (after three hours), the heart-to-heart ended. I can’t say if the intervention actually worked because again, I had no idea there was an issue in the first place. I do know I enjoyed my role as the team clown writing rap songs (“Fatty, Fatty, Fat, Fat” was a classic. Inspired by my pre-game obsession with Cup-O-Noodles, Chile Picante Corn Nuts, and Slim Jims) in the back of the bus to away games and providing self-deprecating comic relief. My first season of water polo was also my last. (Side note: “Fatty, Fatty, Fat, Fat” is still revered by several of my high school peers and, as my 10-year reunion would have it, my legacy. So, I can thank Water Polo for that).

I’ve heard female athletes complain about coaches who, “just don’t know how to coach women.”  I think we are doing ourselves a disservice with statements like this. The job of a coach isn’t to feed the second-class narrative rollercoaster. The job of a coach is to help us become the best athletes and competitors we can be. Navigating the social-emotional aspect of a team of women is much more involved than a team of men unless it isn’t. A fire can only grow if you give it the oxygen to do so.

Now that you think I’m a self-hating, anti-women a** hole, let me tell you another story about my experience with my female athlete peers. I’m not arrogant enough to believe that I am the only woman in the world who doesn’t buy into the marginalizing rhetoric that accompanies a lot of women’s athletics. I have A TON of female athlete friends, whom I hold in high regard and who inspire me just as my male athlete friends do. What’s the difference? Culture and ownership.

I stopped playing football after my sophomore year of high school. I used to say it was because I wanted to find another sport for scholarship opportunities, but the truth is I had fallen in love with acting and our theatre program was just as intense as our football program. In fact, the head of our theatre department and the head coach of our Varsity Football Team saw eye to eye on many things. So much so, that I acted alongside my former head coach in our school production of The Man Who Came To Dinner, the Spring after my last season playing football, but that’s a story for another time (a pretty damn good story, actually).

I knew I had to choose between football and acting. Acting seemed like the more practical choice (Acting? Practical? In this scenario, it was) since I was wanting to pursue it as a career. I was losing my athletic outlet with football, which meant I had to find a replacement. Luckily, we had an amazing volleyball coach, Coach Jen, who reached out to me in the spring following football season. The Varsity Volleyball coach was a former Division I college volleyball player and a member of the U.S. Women’s National Team. She was a badass and she didn’t take sh*t from anyone.

Coach Jen was the first woman I met in sports who treated female players in the same manner as her male counterparts. There was no room for drama. We were too busy striving to become better players. She had high expectations and didn’t care to listen to us talk about how we were going to achieve them. Action was the only language she spoke and if you couldn’t speak that, you didn’t play.

Much like my experience with water polo, I was a volleyball novice. Coach Jen pushed me. She and my teammates helped accelerate my under-developed skills in what seemed like no time at all. The game was all that mattered. I quickly became smitten with Volleyball and to this day it is the only other sport that comes close to my love of football. I attribute that to the mentorship of Coach Jen and the culture she fostered. 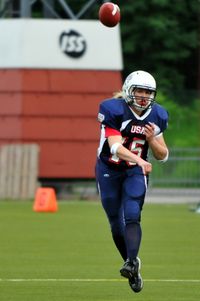 Since then, and having played football with women for 8 seasons I have befriended many who have a similar viewpoint as I do regarding gender equality in athletics. It’s no surprise that most of them have played or coached at a high level. If we want to be viewed as equals to our male counterparts, we must provide a similar narrative. We needn’t tell our story with a gender qualifier in the headline. We needn’t use language like, “just as good as” or “female athlete”. This tells our story from a place of weakness. Our male counterparts don’t include their gender when speaking about what they do, why should we? Let our actions tell the story. We must take ownership of our narrative.

I just received news that I have earned a spot on the 2017 Women’s U.S. National Tackle Football Team. This will be my third time representing the U.S.A. in the International Federation of American Football’s Women’s World Championship. I do not take this honor lightly, I never have. I will say, however, that this year my motivation will be coming from a different place. This time I will not just be playing for my country, but for the sport. It’s my intention to help tell the story of every athlete I take the field with in a way that highlights our athleticism, wisdom, and tenacity. We’re not athletes despite our mind, body, and soul. We are athletes because of our mind, body, and soul. I’m grateful for this challenge, this opportunity. I hope you will join me in changing the way the world views athletes like me. Through action, and a bold, unapologetic narrative.

With Grit and Grace, 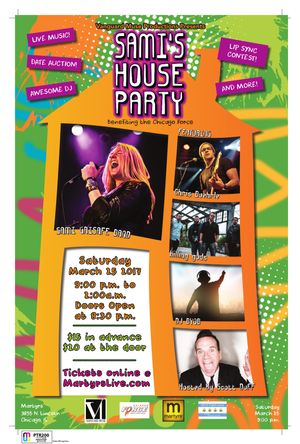 P.S. if you are in Chicago on March 25th. Come support the Chicago Force Football Team (see what I did there?). Date auction, lip sync contest, live music, DJ, prizes, THE WORKS. It also happens to be my birthday. Come celebrate with us! Get your tickets here.