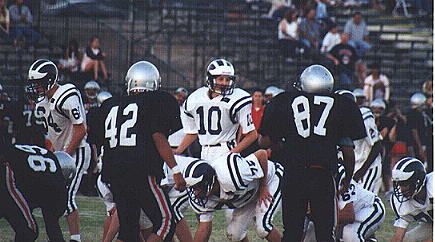 In 1999 I was playing on the Freshman Football team at Redlands High School. The culture surrounding our team and the entire football program was based on these principles: work hard, push beyond mental limits, be reliable, and no individual above the team. This environment was insufficient for growing catty conversation and was heavily enforced by our coaching staff. Sure, this is high school athletics I'm talking about and some may scoff at the smallness of the example, but this experience serves as a microcosm for something much bigger.

I've been a member of well over 100 different teams, ensembles, casts, bands, etc. in my life. Each group taught me a lesson or reminded me of one previously learned. The 1999 Fighting Freshman Football Team is responsible for many of these enlightening moments. There is one memory, in particular, that has proven its relevance time and again.

It was early on an August morning in Redlands, CA. The grass covered in dew, the sun playing peek-a-boo behind grandiose purple mountains. Forty-three young men and I stood before our coach to begin Hell Week. He taught us "Oh What A Beautiful Morning" in the way you would expect a football coach to teach a song, ending the chorus with a grunt, "hey, hey". When the team sang together we sounded like a 1970's muscle car idling at a stop light.

As Coach conducted role call, he discovered our roster of 45 was incomplete. "Has anyone talked to Fowler?", he calmly asked. Nobody replied. "He didn't notify anyone of his absence or tardiness?", Coach persisted. We all silently shook our heads no. "Well, we'll do sprints until he arrives. It is every team member's responsibility to make sure the entire team is here. His tardiness is your tardiness."

We ran sprints for approximately 15 minutes (which felt like an eternity) until Fowler showed up. All of us quietly whispered every expletive known to man as he strolled out to the field unaware of his crime and the punishment we endured for it. Once the entire roster was accounted for, Coach said, "OK, now we can begin". We proceeded to the originally scheduled programming. More of the same, sprints, up-downs, and other exhausting drills. All of us fuming, our legs reminding us of the extra sprints we had to complete because one guy didn't show up on time.

Fowler was what we 90's kids called a "poser". He wanted to wear the jersey, get dressed up on game days, and receive the attention that came along with it, without actually doing the work. Believe it or not, people used to view individuals who lived by this code as "less-than" (at least they did where I grew up). A clean jersey and un-scuffed helmet meant you were a spectator and had no heart. Today, it seems appearance has superseded integrity. People have mistaken the phrase "smarter not harder" for "I watched a documentary about leadership and now I'm an expert. Respect me." (As if that scene in The Matrix where Neo downloaded knowledge and experience suddenly became available in the form of Netflix).

When we finished our first session and broke for lunch, not one person left without making it clear to Fowler that if he couldn't show up on time, he couldn't come back. Fowler returned for a couple days, but quit before Hell Week was over. The price wasn't worth the prize to him.

This example is the only one I can recall of there being any drama within the team. The root of the problem left on his own and all of us learned from his mistake (Thanks, Fowler). The coach made it clear to us that the team was ours and we were responsible for everyone on it. We owned both the success and failure of each individual who was part of us (hold the rope).

Those 15 minutes of extra work conditioned the rest of our season. Nobody entertained complaints about playing time or politics. If we wanted to play, we needed to prove we deserved it. We had that opportunity every day at practice. There were no parent-coach meetings about the amount of playing time because if any of us allowed our parents to be involved we knew we would lose respect. You couldn't negotiate your role on the team. It had to be proven. The only course of action was action itself. Our commitment to this culture persisted and, as a result, we prevailed. We went undefeated that season. What was more impressive than our perfect season is that we actually liked, respected, and trusted each other. That is the Holy Grail!

Recently, I had a conversation with a very good friend and former teammate, we'll call her Josie. Josie is downtrodden and angry about the culture she is experiencing on her current team. I know Josie very well. She is a hard worker, she is selfless, and when she's not on the field she's pretty reserved. She told me about how her team has ostracized her when she, a defensive captain, yelled at someone to do their job in a game. The teammate she yelled at, we'll call her Veruca, has now declared war. Turning social interactions into a scene out of Mean Girls. Veruca has put her ego ahead of the team. Practice sessions have become more about who's on whose side of a petty argument, and less about who's on which side of the ball.

Things have gone from bad to worse for my friend and she called me to say she doesn't know if she can continue being a part of the team. She passionately explained that she loved playing football, but the tradeoff of enduring the catty behavior, the unwillingness to work, and the complacency was masking what she loved most about the game. She then asked if I had any advice. This is what I said to her (summarized):

"Persist. Know that your commitment to making the team, and yourself, better is the virtuous path. Do not, under any circumstances, compromise your drive to accommodate their egos. Do not let them take what you love away from you. Use every practice as an opportunity to hold a mirror up to them, reminding them there is no substitute for work. It will become clear to them in a matter of time that nobody ever achieved great things bitching on the sidelines."

There are Fowlers and Verucas everywhere. The Fowlers believe they deserve respect simply for showing up. The Verucas are too weak to admit they have fallen short and create drama to distract from their shortcomings. We are all at risk of becoming these archetypes and even more at risk of giving them an environment in which they can flourish. We must ask ourselves if WE are doing everything in OUR power to be better. No organization will ever be rid of the person looking for a shortcut at the expense of the whole. It is our challenge to fight for a culture where hard work is revered, integrity supersedes image and no one is exempt from accountability.

For the ego or the honor? How shall we persist?